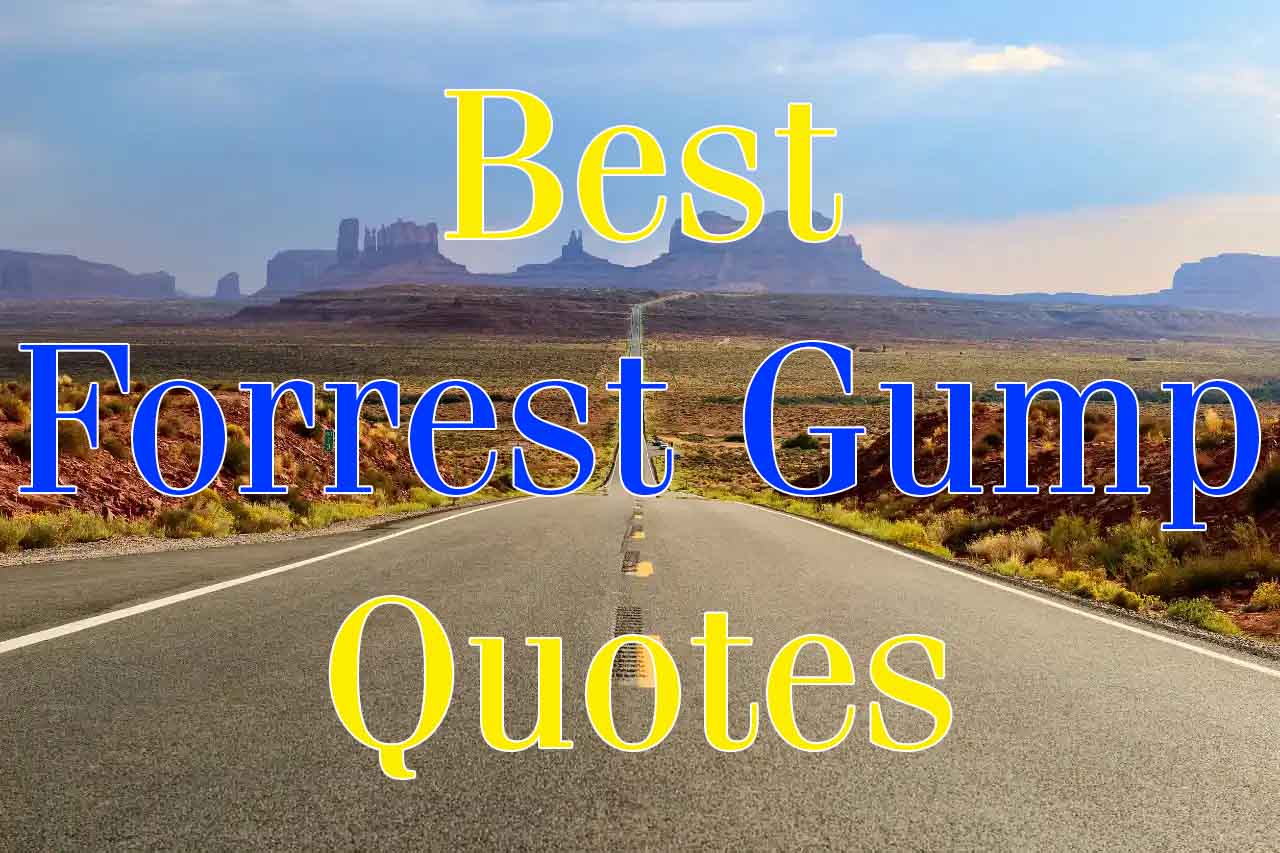 In 1994, Tom Hanks starred in Forrest Gump, a movie about an incredibly kind but intellectually disabled man who accidentally becomes part of several major historical events.

The Forrest Gump movie (watch it here on Amazon) is based on the 1986 novel by Winston Groom, which is also called Forrest Gump. It’s one of the rare occasions where the movie is actually better than the book it’s based on if you ask me.

Decades later, viewers still adore the movie. I for sure am one, though I rarely watch this epic life story. That’s because the sad story of his lifelong friend Jenny Curran (played by Robin Wright (adult Jenny) and Hanna R. Hall (young Jenny) always makes me cry.

Besides these nostalgic and sad moments, part of the fun is counting how many important moments in American history Forrest accidentally stumbles into, from the desegregation of schools in the American South to inventing the smiley face.

The biggest draw of the movie is Forrest himself, the central character who is an unexpected source of wisdom.

Viewers today still repeat his many memorable quotes (along with lines from the colorful cast of supporting characters). It’s an amazing piece of screenwriting.

Here are some of the best quotes from the movie.

1. “My mama always said, ‘Life was like a box of chocolates. you never know what you’re gonna get.’”

This is the most famous quote from Forrest Gump!

Forrest Gump (Tom Hanks) repeats this line several times throughout the movie, including at the beginning when he is sitting at a bus stop with a box of chocolates (that true to his character, he shares with strangers).

This line introduces us to the whole premise of the movie. Forrest Gump goes a long way from the disabled child of a single mother in the rural South and his life takes some unexpected turns.

He never knew what he was going to get, but he accepted life’s curveballs with grace and kept pushing on.

The line also introduces us to the close bonds between Forrest and his mother (played by Sally Field). Her love and wisdom helped him get through life.

This frequent Forrest Gump mantra is another line that fans of the movie repeat over and over again. It’s also another quote that Forrest received passed down from his mother.

We never get the details of Forrest’s disability, only that he had a hard time fitting in because of it. However, his mother never let him feel inferior.

The line means that it doesn’t matter whether other people call you smart or stupid, but what you do. This wisdom encouraged Forrest to look inside himself (and others) before judging.

Although Forrest has bulky leg braces on and cannot walk properly, through sheer force of will he starts running, breaks his braces, and escapes.

The line introduces a recurring theme in the movie, which is Forrest’s speed (a contrast to the child who couldn’t walk properly due to a disability).

It shows us how Forrest won’t let outside limits stop him. Plus, it’s pretty fun to say!

4. “So then I got a call from him saying we don’t have to worry about money no more. and I said, ‘Good. That’s good! One less thing’.”

Forrest (Tom Hanks) says this after learning that he is a wealthy man thanks to Lieutenant Dan (played by Gary Sinise) investing their money in “some fruit company” (actually Apple, one of the biggest companies in the tech industry).

Forrest plays a part in all of the big American developments of the 20th century, including the tech boom.

The quote also gives us an insight into Forrest’s values. He doesn’t care about money at all but values the more important things in life.

These values were also passed down to him by his mother. As he says, in the full quote below,

“Mama said, ‘there’s only so much fortune a man really needs, and the rest was just for showing off. So I gave a whole bunch of it to the Forrest Square Gospel Church.

And I gave a whole bunch to the Bayou La Batre fishing hospital. And even though Bubba was dead and Lieutentant Dan said I was nuts, I gave Bubba’s mama Bubba’s share.

You know what, she didn’t have to work in nobodys’ kitchen nomore. And ’cause I was a gazillionaire and I liked doing it so much, I cut that grass for free.”

5. “Mama always said dying was a part of life. I sure wish it wasn’t.”

Forrest (Tom Hanks) says this heartbreaking line while standing over Jenny’s (Robin Wright) grave. The two only got to be happy together for a very short time.

In times of trouble, Forrest always clings to his mother’s wisdom and her reminders to accept life’s hardships and move on.

However, some things are too difficult to move on from, such as the death of his beloved.

Forrest Gump is a funny movie with plenty of goofy quotes and scenes, but the main character goes through more than his fair share of heartbreak.

Forrest Gump unintentionally makes his mark on pop culture multiple times, including when he coins the famous phrase “Sh*t happens” while on his run across America.

Countless people flock to his mysterious journey, hoping for some wisdom or insight.

When a man looking for a bumper sticker slogan follows him (and accidentally runs through a pile of poop), Forrest’s nonchalant acceptance of the situation inspires a phrase that graces car bumpers for the next few decades.

Bumper Sticker Business man: ‘Hey man. Hey, I was wondering if you might help me, huh? Listen, I’m in the bumper sticker business, and I’ve been trying to think up a good slogan, and since you is a big inspiration to the people around here, I though you might be able to help me jump into … WOUW…. man, you just ran into a big pile of dog shit.’

Bubba (played by Mykelti Williamson) is a simple boy from the South who serves alongside Forrest in Vietnam, but all he really wants to do is go shrimp fishing with his family.

This line is the beginning of a very long speech about how many ways there are to serve shrimp, which Bubba continues listing even as they experience the worst of Vietnam.

In Bubba, Forrest finds a kindred spirit who shares his appreciation for the simple life.

8. “I don’t know if we have a destiny, or if we’re all just floatin’ around accidental-like on a breeze, but I think maybe it’s both.”

Forrest delivers this line in his poignant speech at Jenny’s grave at the end of the movie. It’s part of the same monologue as the part about death being a part of life (quote number 5 on this list).

He reflects on the strange circumstances of his life and Jenny’s, the push and pull of life that pushed them together, then kept them apart.

The full quote about destiny goes,

I don’t know if Mama was right or if it… it’s Lieutenant Dan. I don’t know… if we each have a… destiny… or if we’re all just floating around accidental-like on a breeze… but l – I think… maybe it’s both. Maybe both is happenin’ at the same time…

His life was full of happy (and unhappy) accidents but also going towards a larger purpose.

Although Forrest seems like a simple character, his musings are key to uncovering some of life’s deeper truths.

9. “You’re gonna have to figure that out for yourself.”

Forrest’s musings about destiny pop up throughout the movie, for example when he asks his dying mother about his destiny.

While his mother always gave him guidance, there are some things that she can’t decide for him, and she’ll no longer be able to help him once she’s gone.

Mrs. Gump : You’re gonna have to figure that out for yourself.

Although Mrs. Gump on her deathbed reflects on her destiny as Forrest’s mom, she can’t tell Forrest about his future because he has to forge it himself.

Forrest uses this line to explain his friendship with Jenny, one of the most important relationships in his life, that starts from the day that they meet as children.

He references this expression to show how close they were because peas and carrots combined are a common side dish, particularly in the South.

Forrest and Jenny are both outcasts in their town and spend their whole childhood defending each other.

Even as adults, when they can’t help each other in the same way, they find their way back to each other.

11. “Bubba was my best good friend. and even I know that ain’t something you can find just around the corner.”

Forrest suffers a lot of loss over the course of the film, and he says this line when reflecting on the loss of Bubba during the Vietnam War.

Forrest is sad about the loss of his friend, who was one of the few people in his life that actually understood him, and about the tragic loss of Bubba’s potential—instead of fulfilling his dream as a shrimp boat captain, he died in a war neither of them understood.

The line also shows that Forrest is smart enough to understand life’s important things, such as the value of friendship.

Forrest says this line to Jenny after she rejects his proposal. Forrest is so used to everyone underestimating him that he assumes Jenny rejects him because he isn’t smart.

However, when Jenny says “you don’t want to marry me,” she’s not doubting Forrest’s love, but her own worthiness of his love due to her trauma.

This heartbreaking line shows us how even people that know each other so well sometimes misunderstand each other, and it shows us again how Forrest has an innate understanding of life’s important things.

Jenny (Robin Wright) says this to Forrest after he attacks some men at the club where she works.

Forrest loves Jenny, but his love makes him overprotective and sometimes forgetful of the fact that she’s independent.

This line gets at an important problem that the two have to work through before they can be together. It also gives us an insight into Jenny—she doesn’t believe she deserves to get rescued.

14. “My mama always said you’ve got to put the past behind you before you can move on.”

Forrest quotes another one of mama’s wise lines when he’s talking about his cross-country running. Forrest starts running out of despair when Jenny rejects him, and after crisscrossing the country several times, he suddenly decides to stop.

While running, Forrest was physically putting distance between himself and the memory of his heartbreak, but he wasn’t emotionally moving on from the past.

He can only truly heal once he accepts the past and stops dwelling on it, and that means ending his attempts to run away. These are just a few of the most memorable lines from Forrest Gump.